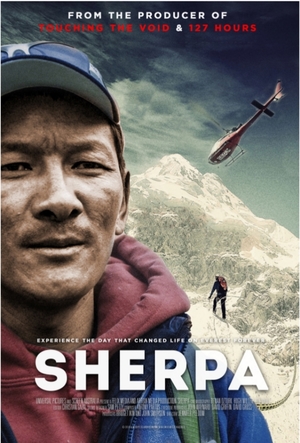 The 2016 Llanberis Mountain Film Festival has just finished, and on its closing night I was able to see Sherpa – Trouble on Everest, the 2015 documentary from director Jennifer Peedom. Sherpa, as the name suggests, is about the Sherpa people of the Khumbu valley in Nepal who work in the profitable but treacherous climbing industry on Mount Everest. The film follows Phurba Tashi Sherpa as he guides a group of international climbers attempting an ascent of Everest in 2014. However, their expedition is interrupted by a massive avalanche, which threatens not only the lives but also the livelihoods of those who work on the mountain.

Sherpa is a visually stunning film. The audience is treated to serene vistas from Himalayan peaks as well as hair-raising point-of-view footage of midnight glacier crossings. Against this backdrop of beauty and danger, the film-makers explore the increasing commercialisation of Mount Everest and the effects this has on Sherpa communities. After the avalanche, the film-makers become battlefront journalists, reporting on rescue attempts as they occur and bearing witness to growing tensions between the Nepalese guides and foreign tourism enterprises. The film is both exciting and informative, and I was sometimes saddened and other times inspired by the events it depicts.

If Sherpa has a failing, it’s that it tries to capture too much in its 96-minute running time. The first half of the film is a broad look at Sherpa culture from the 1950s until today, whereas the second half focuses almost entirely on the aftermath of the avalanche. Each half could warrant a documentary of its own, but when squeezed together into a single film, neither felt completely satisfying and I found myself wanting more. However, this is still a great documentary for anyone interested in mountaineering, Everest or the Sherpas themselves.

Near me
40 miles
This site uses cookies: Find out more.